Today, the Palais de Rumine houses the cantonal museums of geology, zoology, archaeology and history, the Cantonal Money Museum, and the cantonal and university library.

In 1871, Gabriel de Rumine (1841-1871), an aristocrat of Russian origin with a Lausanne mother, left 1'500'000 francs to the City of Lausanne for the construction of a building for public use. The City decided to build a new university at the foot of the City hill, and organized an architecture contest in 1889, which was won by Gaspard André of Lyon.

The palace features Florentine Renaissance style, alluding to the cradle of universalist humanism, which was influenced by its encyclopaedic ambitions: the general service of the Academy, a classroom, learned societies, the technical faculty, a library and no less than five museums can be found on site. Monumental columns, pergolas, loggias and bell towers adorn the 1906 building. The central portion joins two side wings and houses a highly elaborate section containing, among other things, a main staircase that creates an optical illusion effect, an atrium with a small pond, a network of galleries and overlapping ramps. Today, the Palais de Rumine houses the cantonal museums of fine art, geology, zoology, archaeology and history, the Cantonal Money Museum, and the cantonal and university library.

Experience the Vaudois winter to the full 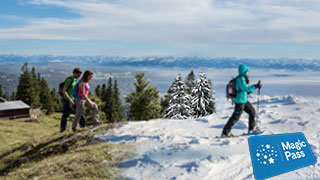